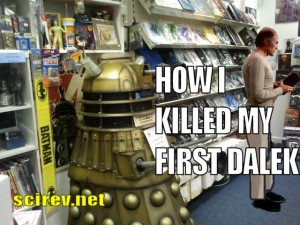 This fanfic is a short story sequel to the fanfic WHO:1999.

Terrible noises of explosions and flashes of blue light could be heard and seen respectively on the viewscreen in the TARDIS.

There were three men in the TARDIS at the time. A young man, with short wavy hair, wearing a long green velvet jacket, a waistcoat with a pocket watch and a cravat, looked quite worried at the current happening. 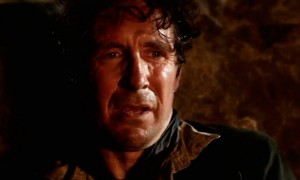 “I couldn’t have imagined this would have happened. Or have happened now.” the man uttered. He was the Doctor, his Eight Incarnation now.
He had been to another universe where he had picked up his two current companions, Paul Morrow and Professor Victor Bergman. They had just entered the Doctor’s Universe-777.

Passing through the Vortex, the TARDIS had breached the inter-universe barriers and as soon as they arrived in the Doctor’s universe-777, they witnessed an explosion in the Vortex.

“Does this happen often?” Victor enquired. His scientific studies hadn’t prepared him for what he was experiencing.
“No! The walls of the multiverse have deteriorated!” the Doctor exclaimed.
“Was it our fault?” Paul asked. “Did we cause this ourselves by coming here?”
“No of course not, I’ve been doing this for ages untold. The Time Lords – they are my people – being present allow travel to parallel dimensions. They keep open the pathways. Something has happened. There is a “storm” in the “pathways” right now.”
“A storm, Doctor? What kind of storm would that be? A temporal storm?” Victor asked.
“More of a warstorm. A warm is brewing. I knew it had started. It has been for quite a while now. It started on Skaro a long time ago, it’s the home planet of the Daleks. They are the enemies of the Time Lords. Or on BeretWorld, an interdimensional nexus.

Well there already was another Time War before, but this.. this will be  = no this is = worse, much worse.”
“Can’t you go back in time, Doctor? Stop it from happening in the first place.” Paul asked.
“I can’t go back in my personal timeline. And the Time Lords will be trying all they can”, the Doctor answered. “It doesn’t seem as if I will be able to take you back to where you came from. Or returning back to your universe any time soon.”
“It’s not as if we had much to look forward to. Our earth was dying in the future. Our moon’s resources were going to start to dwindle soon, we had an uncertain future in space”, Victor said.
“I’m really worried. What are we going to do now?” Paul asked.

“I’m not a Man of War. I will do my best to bring peace. As much as I can.”, the Doctor answered.

The story takes place in the Doctor’s universe-777 which is the same universe in which JJ Abrams’ Star Trek (2009) movies occur. The story of the first Enterprise may have happened differently in the original Star Trek universe.
The Sargasso sea of Space with its derelict spacecraft is taken from Space:1999 (The Cellini episode) “Dragon’s Domain”. Thanks for that great episode.
Star Trek is (C) by Paramount;
Doctor Who, Amy, Rory, the Daleks are (C) the BBC.

My understanding is that the last great Time War took place towards the end of the Eight Doctor’s run in books/audios/comics. Thus the Doctor’s crossover with Space:1999 occurred in that time period. 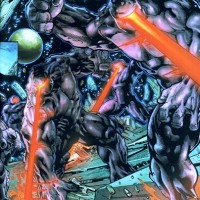 For the Stargate Timeline, it happens after Stargate Atlantis 4×3 and the Stargate Continuum movie.
For the Doctor it occurs after the first Star Trek (2009) reboot universe fanfic on this site which can be found here.

The Doctor is an alien explorer through time and space, going to amazing and terrible places in the universe, armed with his fantastic sonic screwdriver. The Tenth Doctor is currently travelling with Spock Prime.”

Shots were heard. The Alpha encampment which was the only trace of civilisation on this parallel earth was being attacked. But by whom? Wasn’t all of humanity on this earth dead ?

Victor looked up towards the sky and saw an army of flying invaders.

“What can these be?”

END_OF_DOCUMENT_TOKEN_TO_BE_REPLACED

This fanfic is a sequel to WHO:1999 and War Breaks Out, a Doctor Who crossover with Space:1999.
The Eighth Doctor had just closed the TARDIS doors. His new companions were Paul Morrow and Professor Victor Bergman, from Universe-700.
END_OF_DOCUMENT_TOKEN_TO_BE_REPLACED 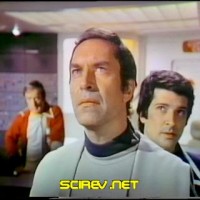 Set after the tv-movie with Paul McGann as the Eight Doctor, towards the end of his run in books/comics/audios.. before the last great Time War (really)broke out.
A Maltese fanfic/crossover/literary fiction/story…

END_OF_DOCUMENT_TOKEN_TO_BE_REPLACED

This is the crossover fanfic in my fan-series which features a parallel universe Moonbase Alpha (Space:1999) as it would occur in Universe-777 (the Stargate & Doctor Who universe).
Story (C) 2007-2012 Mr SciRev

For the Dr Who Timeline Related to this Fanfic. It occurs soon after the final episodes of the 6th series of the new Dr Who
For the Stargate Timeline, it happens (some time) after Stargate Atlantis 4×3 but definitely before the Stargate Continuum movie.
SPOILER: none

What you need to know:
“The IOA (International Oversight Advisory) has set up a top secret base on the moon powered by a ZPM (Zero-Point Module) – an ancient power source. Stargate Command has commissioned special crafts called Eagles and a Stargate – a ring-like device created by the Ancients able to send people through a wormhole – but one without a protective iris. A separate section on the moon houses a super-hadron collider. ” 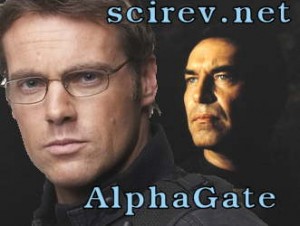 * * * * * * *
Earth-777
* * * * * * *
The IOA (International Oversight Advisory) commission had decided to set up a base on the moon. Of course, like the Stargate, this was a top secret space program. The public was to be kept unaware of these developments at least for the time being until the Stargate programme went public.
On one side of the moon there was already another small division, studying elementary physics using a super-hadron collider, one which would smash particles at speeds unheard of before. The hadron collider on earth at CERN, LHC, was like a child’s toy, compared to this one. This collider was being used to discover dark matter which might be ejected between parallel universes too, in an attempt to provide alternate realities scientifically and perhaps help with inventing new power sources, since ZPM’s were scarce. You couldn’t call this a base really, it was hardly staffed. And again it was top-secret. So a moonbase on the dark side of the moon would help to man the division too.
That division was also responsible for detecting cosmic rays from the Big Bang, or Big Bounce, as theorists called it. Some cosmological theories believed there were other universes before ours came into being, and it was a ‘Big Bounce’ rather than a ‘Big Bang’. The total number of personnel on the base and on the collider division amounted to 1999.
END_OF_DOCUMENT_TOKEN_TO_BE_REPLACED 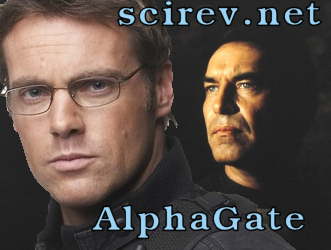 This is the next crossover fanfic in my WhoSliders v1 fan-series featuring Doctor Who (the Fifth Doctor – played by Peter Davison in the classic BBC tv series) and the Sliders.