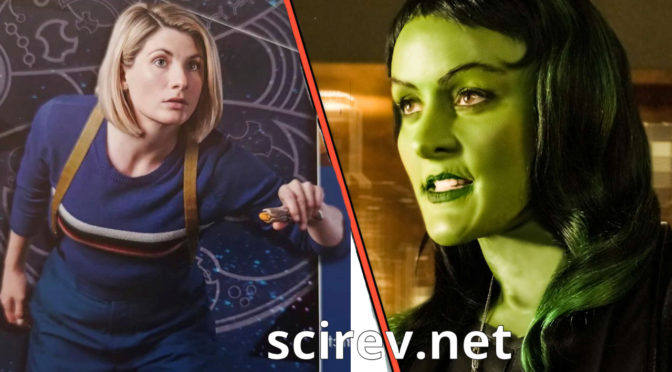 This is the crossover fanfic in my fan-series which features Doctor Who and Star Trek Discovery.

For Doctor Who, it’s before the New Year special with the Daleks.

SPOILER: Episode S03E11 of Discovery. You need to watch it before this.

What you need to know:
“Universe-777: The Doctor has regenerated into a woman. She travels with the ‘fam’.

Universe-881 aka F-Space or Star Trek Federation Prime Universe: The Discovery  with its unique spore drive jumped from the 23rd Century to the 32nd Century.

The Burn caused most Starships to blow up due to an inactive dlithium reaction.
The Federation is at an all time low. Earth has left the Federation. which is weakened.

Pirate Osyraa has boarded the Discovery.”

The TARDIS materialised with the usual whoop sound in Engineering on the Starship Discovery. The Doctor was on her own and had been travelling in Universe-881 for a while. She immediately realised that something was up. There was nobody in Engineering, which was unusual and even dangerously, most likely.

Time to take action. She opened the TARDIS doors . She recognised the Spore Cube. Which was now empty. Stamets – the Engineering Chief – had been taken over by a Serpent King Crown and made to jump the ship at Osyraa’s behest. They removed him from the Cube and took him elsewhere, probably to find a way to replace him.

So the Doctor set to access the controls in Engineering. She discovered the Discovery was jumping to Federation HQ. This was not located on Earth as in the past. The pirates were clearly preparing to eradicate the Federation.  But, the Doctor would not allow this.

So the Doctor connected herself to the spore drive, in the Cube. She initiated yet another jump, which surprised Osyraa. “How can the humans have started  a jump? Without Stamets?” she asked.

Meanwhile the Doctor jumped, this time towards Ni’var, which was the new name for Vulcan after the Vulcan-Romulan reunification.

The stress from the jump was extremely tiring, and the Doctor fainted.

Suddenly, Emerald Chain soldiers on the orders of Osyraa entered the chamber, finding the Doctor unconscious. “Who is this woman?” they asked, “she is not Starfleet”.

And they took her to Osyraa for interrogation.

She woke up, seeing a green skinned woman.

“I’m not human. Do you have some tea?” the Doctor asked.

“Tea? What do you think this is? A restaurant?”

“You should treat your visitors better.  What do you think you are doing stealing this ship?”

“I am taking what is mine”

“And I will be destroying Starfleet”

“You will do no such thing. You are a foolish woman.”

“Enough banter! I will torture you so you will tell me how you could pilot the ship” Osyraa became angry.

“That’s for you to find out. Meanwhile I’m warning you. Stop now, or you will be sorry” the Doctor replied. 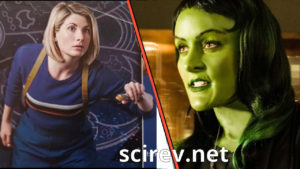 “Hahahah what guts you have lady. You are helpless before me, I am Osyraa”

“Well I am the Doctor. And you are helpless. ”

“Helpless? What on earth are you on?”

“Yes you are. Check. Can you control this vessel?”

Osyraa points to her henchmen. They confirm, the vessel’s controls are all locked. Shields being down now, a message was incoming from Ni’Var.

“I took the time to disable all your controls. You are adrift now. You can’t even use impulse controls”, the Doctor explained.

A Vulcan appeared on the screen. The Vulcan warned the Discovery to acknowledge itself. Osyraa decided to answer.

“I am Osyraa. I hold all these people prisoner. I shall kill them one by one unless you give me my demands”

“Demands? You are surrounded by our ships. Give yourself up”

“Indeed you should”, the Doctor added.

“I will kill the humans then” Osyraa answered.

“Coward” the Doctor looked at Osyraa. “You are just a coward”

“I am not! I will kill you personally for that”, Osyraa replied.

“Something has happened to the Discovery”, Admiral Vance was thinking, quite aloud.

” We have not heard from them. I am very worried.”

Back on the Discovery, Tilly and Lt Detmer fought off one of their captors. Lt Detmer had augmented cybernetic implants on the left side of her face.

They acquired the weapons and set off to defeat the other henchmen. They kept on doing this until they would reach, and hopefully take the Bridge.

“You’ve been defeated. Give up. Or you will be sorry you did not.” the Doctor warned.

You know what I’ve been called?

“Destroyer of worlds. You should beware”

The Doctor was out of the lock she was placed in. She had been able to access her sonic screwdriver vocally – by using her voice  – and open the lock quite easily.

Suddenly, Tilly, Detmer and a group of others entered the Bridge.

This gave the Doctor the advantage of surprise and she knocked Osyraa out.

“Who are you?” Tilly asked.

“Me? I’m the Doctor. I’m a friend. I made your ship jump to Ni’Var.  You should talk to the Ni’Varians as they still think Osyraa is in charge. Myself, I have to go now. I’m needed elsewhere.”

Doctor Who belongs to the BBC