Welcome to this new CROSSOVER FANFIC for Immortal Squad which is the Third Volume of WhoSliders. It follows the Doctor Who Season 10 ending where the immortals Clara and Me are left to roam the universe in their stolen TARDIS. Clara having been taken from the moment before her death, is now an immortal. Me is an immortal (previously called Ashildr) thanks to the Doctor’s intervention in the past.

SPOILERS: A major character death in the Guardians of the Galaxy v2 movie. He appears in this fanfic series.

Story (C) 2016-2017 Mr SciRev based on a concept developed by the author in Hannover, Germany.

This story occurs after the last episode of Season 9 of the new Doctor Who. 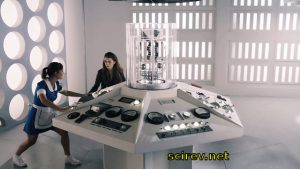 What you need to know:
“The Timelords of Gallifrey have suffered an embarrassing loss. A TARDIS has been stolen. Once more. Not by a Gallifreyan. The last time this happened, it was aeons ago. The Doctor stole a type I TARDIS. Now, it was the humans from Earth, Clara and Me, who stole a TARDIS. A plan was being worked out and humans would help.”

The Timelords of Gallifrey decided to put this into motion. They gathered a special team to handle the situation. The team was a kind of ‘Suicide Squad’ of sorts, with a mix of overly evil individuals or somewhat not so trustworthy types. All team members were taken out of time as Clara was. Some were already immortal, such as Sabretooth, Angel (from Buffy) and the Elseworlds Vampire Batman. Others were made immortal by the extraction procedure, as had happened to Clara. Thus it made sense to call them the Timelords’ ‘Immortal Squad’ since all the members were immortals. All were implanted with a bomb in their head which, should they fail to obey the Timelords, will be exploded, resulting in their death. A special individual will lead the team, namely Agent Coulson of S.H.I.E.L.D. (from the tv series), thanks to his experience in setting up a team of Secret Avengers. Coulson is NOT an immortal, but will be coordinating the team from Gallifrey.

Thus the ‘Immortal Squad’ consists of:

“Your squad’s task is to retrieve a stolen TARDIS”, Coulson explained.
“A stolen what?”
“TARDIS. Time And Relative Dimensions In Space. Alternatively, you might call it Traversable Acausal Retrograde Domain in Space-time. Essentially a time and space machine.”
“A spaceship that can travel in time and space!” Vampire Batman exclaimed, to which Coulson nodded.

All were quite shocked and disbelieving what was happening. Except for Kilgrave who asked, “and who stole it?”

“Clara and Me. Not “me” as in myself. A woman named Me”, Coulson answered.
“Me? What kind of name is that”, Yondu asked.
“It’s just a unique name”, Coulson answered, continuing, “Like you they are immortals. Clara has been taken from just at the moment of her death, similar to some of you. Me was made immortal by a Time Lord called the Doctor. He’s a good guy but this mess is really all his fault. You are to apprehend them and bring them back together with their TARDIS, which is currently in the shape of an American Diner. Time for you to go. You will be sent using this portal into a location and time where Clara and Me are believed to be, with their TARDIS.”
“An American Diner? Seriously? This should be fun”, Kilgrave said. “I still remember when I had hostages in a diner. By the way, Coulson, remove the bombs in our necks.”
“No Kilgrave. Your power won’t work on me thanks to special Gallifreyan technology. If you try to abuse your colleagues, we will trigger the bomb in your neck, so you had better behave”, Coulson retorted.
“So where is the stolen TARDIS now?” Dr Leekie asked.
“It’s currently in Central City, in a location close to STAR Labs in the USA. It’s run by a Howard G. Wells. Find out if there is a connection, then apprehend them, and their TARDIS too.”
“Let me introduce your TARDIS. It’s remote controlled, so you cannot decide to do like Clara & Me, and steal it.”

The Immortal Squad saw the central column of their TARDIS reverberating and moving. Their TARDIS had arrived at the destination, STAR Labs.
The team had decided to split. One half – Angel, Owen Harper, Kilgrave and Dr Leekie – would stay in STAR Labs and find Howard G. Wells. The rest – Yondu, Sabretooth, Dr Libbie and Vampire Batman – would go to the diner finding the runaway duo.