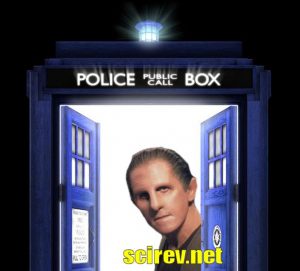 ‘My name is Odo. I am a shapeshifter. I was an outcast who was adopted by a Gallifreyan years ago. I took this TARDIS as my own after my adoptive father Tecteun, the previous occupant, who died due to radiation burns. Before dying he gave it to me. We were travelling because both us were fed up with our decadent Gallifreyan society and I wanted to explore the universe and perhaps find others of my kind. That is, until it developed systematic troubles. My TARDIS needs urgent repairs. My father was called Sandman by many.’
The Doctor replied ‘We have orders to arrest you. Don’t you have a better excuse than this?’

‘Do you have any proof, any holorecordings, documents of some sort, to prove your claim that the TARDIS was given to you?’ the Doctor asked.

‘I do not have anything. If anything I should be the one to inherit it, as my father did not have other heirs.’ Odo explained.

‘There is the problem of your race. While technically or legally you are Gallifreyan due to being adopted, our legislation isn’t exactly in your favour. Now that the Time Lord who adopted you has died, you don’t exactly remain Gallifreyan. So it is not clear if you should inherit or not.’ the Doctor said.

Suddenly Captain Archer entered the room and said: ‘Mr. Odo, isn’t that your name, well here you are in Earth territory, so you will not be arrested.’

‘But Sir’ the Doctor was irritated at seeing the Captain do this. ‘I must protest..’

‘Dismissed’ the Captain did not want the Doctor doing the usual Gallifreyan mess. Not today.

‘My superiors are willing to help you, if you work for Starfleet, which is our Earth organisation which expanded into space. I don’t care for the Gallifreyans. We do have one half-Gallifreyan on board, you have met him, the Doctor. He’s a bit stubborn as you have noticed.’ Archer explained the situation to Odo.

Ever since this Odo fellow has been on board, with his TARDIS, I feel a certain familiarity with his space-time-craft. The TARDISes have a genetic bond with their owners. This TARDIS isn’t mine, yet something is even more weird. I feel like a stranger here. I almost want to go and check out his TARDIS. Why do I feel this?

Who is this Odo? I keep thinking that there is more. There is more. Security Chief. Why did I think of that? I’m the First Officer.

‘We may run into others of your kind, Odo. If you work for us and stay with us, we may be able to help you. If you refuse our help, we will not be able to stop the Gallifreyans from arresting you, you understand.’ Captain Archer explained.

‘I am… intrigued by you humans, your culture, especially the terrestrial one. I accept the offer.’

What got into me, I do not know. I cannot keep from this TARDIS. I must open it. An electronic key should suffice. Starfleet design of course. Yes, it has opened. I can enter it.
This must be Odo’s Console Room. Very futuristic, I must say. Mine would be different. What am I saying?

I need the controls.. I need to set the navigation system… I am setting it, here goes.. What have I done?

It’s dematerialising… But where…? Why did I do this? The TARDIS isn’t mine, so why did I just take it as if it were mine? I belong here, don’t I? Is somebody controlling me, urging me to help him or her?

On board the Enterprise

Meanwhile a ship materialised out of nothing. It was a ship unlike what anyone had seen in this time. This ship was from the future Prime Timeline-881. It had been created by the Vulcans and was piloted by Ambassador Spock. Spock’s ship, like the evil Romulan Nero’s, had been swallowed by a black hole after he had successfully stopped the supernova by injecting red  matter into it.

His ship had been buffetted through the time vortex and came out in the merged timeline. The alternate reality had not been caused by Nero yet.

Spock looked through his viewport and saw the Enterprise. Fascinating. It turned out to be Archer’s Enterprise, but it looked wrong.

Nevertheless, he decided to make contact. If anything to try and get back to his time. He would need help to go to the future.

But was this his past? What happened to his Universe? Little did he know that his Universe no longer existed as it was, but now had been merged into this new one. And what had happened to Nero?
THE END…
CONTINUED IN SPOCK’S DESTINY – SECOND FANFIC IN THE “TREKWHO” SERIES

Doctor Who, Gallifrey are the BBC’s
Enterprise, Spock, Odo are Paramount’s
Sandman is an original (parody) character of mine
Captain Jonathan Archer is a parallel world parody of Paramount’s Captain Archer

AUTHOR NOTES:
The 2016 version adds a new section featuring Admiral Spock from the Prime timeline. Before ending up in the 2009 Star Trek movie, he ends up in the merged universe. What part will he play?