The Doctor worked the controls and read some particularly disturbing readings. A microtransporter device was emitting quantum signals. Such a device was certainly dangerous. It was forbidden, for good reason. What was to stop some random assassin from beaming sulphuric acid into an ambassador for instance? The technology should not exist.

Nyssa and Turlough set the controls for tracking the device. Swiftly, the distance between them in terms of space, time and parallel dimensions began to be shortened through a binary search trajectory.

The TARDIS materialised in a wide passageway area of a Space Station within a parallel universe.
It seemed familiar to the Doctor. ‘Do you recognise it, Doctor’, Turlough asked?

Suddenly an officer was running away from a security team, eager on capturing him. The scene went on to a restaurant until a woman with odd spots almost kills him with a knife.

‘What on earth is this madness’ Tegan asked aloud.
‘We’re not on earth. This is Deep Space Nine.’, Nyssa answered. ‘I’ve been here once before, with the Doctor’.
‘This is a space station manned by the Federation. It orbits the planet Bajor. Bajor has applied to join the Federation, it is not yet a member at this point in time.’ the Doctor answered. ‘I’ve been here before a number of times. Probably will be again.’ 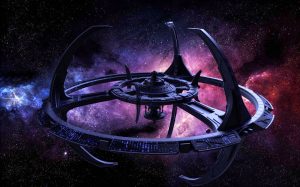 ‘Should we interfere?’ Turlough asked.
‘Well, we’ve got to find the microtransporter technology.’ the Doctor said.
‘So we interfere as usual then’, Nyssa commented.

Another security team, led by Odo, arrived on the spot.
‘Oh how do you do, Doctor’, said Odo. ‘Welcome to DS9!’
‘Thank you Odo. These are my companions, Tegan, Turlough. Nyssa you already met last time.’ the Doctor said.
‘What brings you here’, Odo enquired.
‘I have detected traces of a microtransporter technology. We Timelords have a standing order to destroy all traces of that technology. It is too dangerous to be allowed.’ the Doctor explained.
‘No problem Doctor. Just allow us to find the killer who used the device and bring him to justice. Then you can destroy it.’ Odo breathed in relief.
‘My instruments in the TARDIS indicated two, not one, microtransporters.’
‘Oh yes. Chief O’Brien got one to help us find out how the killer operated’. Odo was thinking where this could lead.
‘How did he get it?’, the Doctor asked.
‘I don’t actually know. Let’s go ask him.’ Odo pointed towards the Turbolift.

The Doctor told his companions that if they wanted, they could take a tour of the station. Kira, who had just entered the Promenade, offered to show them around. But they prefered to stay with the Doctor, in case anything happened.

‘The microtransporter? How did I obtain it? It was a left-over from the days I had infiltrated the Orion Syndicate, actually. It was Bilby’s.’ Chief O’Brien said.

‘We can destroy it now.’ the Doctor said. ‘But before, allow me to scan it with my multifunction sonic screwdriver, which is basically my Swiss Army Knife..’

O’Brien said that it was a knife with many other uses, from the 20th century.

‘There is a transporter pattern resident in this device, which correlates with primitive tachyonic time travel.’ the Doctor exclaimed.

‘You mean, somebody’s transported themselves from the future, into this device?’
Miles was astounded. The Chief remembered how Scotty was found by the Enterprise some years back, his pattern stored in a transporter buffer.

‘A very intelligent way, if I may say’, Odo said. ‘Now to determine how to bring this person out of the device’s buffer and to see who it is.’

‘Thank God you’re here, Doctor. This is your domain, after all, and if you weren’t here we would have simply destroyed the device before finding out there was a person trapped within it! You know of the Dominion war, it’s having its toll upon us.’

The Doctor and Chief O’Brien finished their analysis. Before extracting the person from the buffer, they tried to determine what race the person belonged to.

‘It’s a female kobali!’ the Doctor exclaimed. ‘Fascinating species yet bloodthirsty for revenge. She’s from about one year in your future.’

‘your future?’ Odo asked. ‘Forget I asked, for a moment I almost forgot you are a time-traveller.’

They worked on releasing her from the pattern buffer of the tiny transporter. It was not a difficult task. Finally, they materialised her in front of them.

‘I know this place! This is Deep Space Nine!’ she said.

O’Brien noticed that some of her DNA was human.

‘She is a human whose DNA has been altered by the Kobali’, the Doctor explained.
‘The Kobali is an alien race which rebuilds itself using the dead of other species. Most of these ‘victims’ do not remember their past lives.’

‘I remember my past life. I am Ensign Lyndsay Ballard assigned to Starship Voyager.’

‘The Voyager!’ the Doctor and basically everyone else said.
‘Starfleet has established contact with Voyager which is lost in the Delta Quadrant quite recently.’ O’Brien said.

‘True. And you will manage to contact them again and in real-time thanks to somebody you know.’ Lyndsay told O’Brien.

‘We might have Lucsley and Dulmer, or was that Mulder and Scully from Bashir’s holonovel, pop up on us soon, in any case.’ O’Brien said, bowing to the inevitable temporal investigations agents.

‘Enough of this banter. There are TWO UNIVERSES in danger right now.’ Lyndsay said. ‘I’d say this is worse than a simple pollution.’

‘Something terrible is going to happen. Two universes are going to be merged – the Doctor’s universe and this one!’ Lyndsay said.

‘How do you know of my universe?’ the Doctor asked.

‘I met some of your friends from your universe. A certain Romana who told me about you. She gave me information on your whereabouts in this time.’

‘But how do you know this is going to happen? I have a feeling you might be inventing the whole story.’ the Doctor was not convinced.

‘Romana was travelling with a dog-like robot, which she called K9.
The universe-merging has already reached my time, a year in your future.
The Kobali allowed me to leave them in order that I might find help to prevent all of this from happening.’ she replied.

The Doctor felt something surge through him. Was it too late? As everything faded away, he realised it was. Only his hope did not fade.

Memories. Mine. Someone else’s? A beautiful asian earthgirl laughing.
Who? Confusion. Beautiful smile. Altruistic character. Always ready to help.
Time. Twisting. Turning. Changing. Merging. Dual histories.
Becoming one. Clock turned back. Changed Past. Violation of Time Rules.
Gallifrey is Starfleet Homeworld soon after first contact with Earth’s
Starfleet. Captain Jonathan Archer. I’m his First Officer. It was my
first body, pre-regeneration, old man. Not Dax. The old man is myself. I
have white hair. Sometimes I get angry when I shouldn’t. A byproduct of
my mixed heritage, perhaps. Or just of Gallifrey. I wear 20th century
style clothes, though this is the 23rd. Tends to make me stick out.
Klingon first contact went wrong. Though I tried to avoid it. Could feel
it would go wrong. How? Our ship is the first Enterprise.

Questions. Don’t know. Who’s the asian girl? Yes, she’s our comms officer,
Hoshi Sato. But she’s supposed to be well, different. Time’s wrong, too.
Can feel that. This Hoshi is comfortable in space. I feel she is supposed
not to be. She’s still a genius though. And she’s not Japanese like I think
she should be. She’s from Singapore instead. I feel different too. I’m
half Gallifreyan and half human. I’m in love with Hoshi. Haven’t told her
yet. We Gallifreyans don’t exactly trust humans. Half of me does, the other
half doesn’t. It’s an internal conflict in my case.

Told the captain something feels wrong. He said we can’t base our actions solely on feelings. He’s right of course. He says we must base them on reality. But I can’t help feeling it is not the right reality. I still have a certain hope in me that things will turn out right (whatever they are).

I checked sensors and detected a Gallifreyan renegade type 40 TARDIS. It’s a time and space travel machine. TARDIS stands for Time and Relative Dimensions in Space. It materialised in our dock. Didn’t identify itself. I led a team down to the dock. Security officers and the rest. Waited carefully until it opened. Looking to see who would get out of it.

A strange looking humanoid appeared to be the occupant. He looked around quaintly and said “Hello. Does this mean I’m under arrest?’ I replied ‘You are a renegade to our people, so yes’.
‘Don’t you want to hear my story’, he asked.
‘I am not interested in protesters who run away from problems instead of helping solve them.’ I replied.
Our Gallifreyan society was not perfect, but it had its advantages.
Some of our ancestors were a race called Vulcans. Their planet Vulcan grew uninhabitable after the Emotion War. Most of the survivors had abandoned it, and settled on Gallifrey where they were made welcome by our ancestors. Their planet was then colonised by Earth centuries later.. until that madman from some future timeline destroyed it completely.

‘My name is Odo. I am a shapeshifter who was adopted by a Gallifreyan years ago. I took this TARDIS as my own after my adoptive father, the previous occupant, died due to radiation burns. Before dying he gave it to me. We were travelling because both us were fed up with our decadent Gallifreyan society and I wanted to explore the universe and perhaps find others of my kind. That is, until it developed systematic troubles. My TARDIS needs urgent repairs.’

CONTINUED IN ODO’S TARDIS – FIRST FANFIC IN THE “TREKWHO” SERIES

This fanfic occurs for Star Trek during the Star Trek: DS9 episode “Field of Fire” (season 7) which for me (when this was first posted) is contemporary screening-wise with “Terminus” (on BBC Prime).

The madman from the future is, of course, a reference to Nero in Star Trek 2009. In the TREKWHO universe, he ended up further back in time.