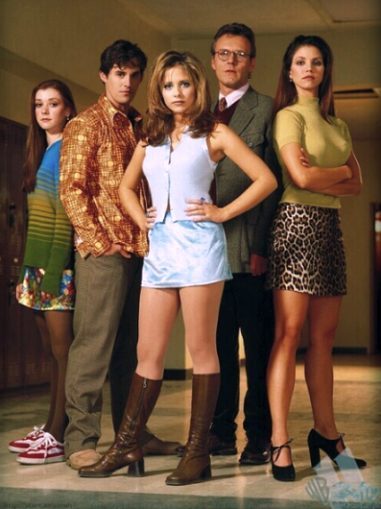 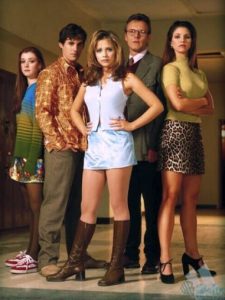 I’ve been going back to Joss Whedon’s Buffy the Vampire Slayer lately! I’ve never watched it more than a few episodes in Season 1, so I thought I would watch some more.

1×5 “Never Kill a Boy on the First Date” isn’t bad at all. It’s good, really, we see Buffy meet Owen and they end up having a date. Almost. Because Vampires abound and a Slayer, well has to slay them. Giles wants Buffy to step up with her patrols whereas she wants to have a date. She tells Giles “Clark Kent has a job, I just want to go on a date.”

This really makes her seem like a real person and a likeable one.

Finally they break up because poor Owen is too addicted to danger.

There is this school outing at the nearby zoo (not sure why a school outing in america would just go to a very nearby zoo where you can walk to the school from the zoo in a few minutes). Some school bullies enter a section with some hyenas which is off-limits. Xander follows them and they all end up possessed by the Hyenas’ spirits or something.

It’s fun to see such a different Xander. Behind the possession, was the zookeeper who wished to be the one getting possessed.

Principal Flutie ends up dead, killed by the students (except Xander). I didn’t expect that to happen.

The school itself is vague in these episodes, there are few regulars except for Giles the school librarian. Smallville had a much better representation of a school.

1×7 “Angel” is a good introduction to this character which I wasn’t familiar with. He was, or rather is, a vampire, however he has suppressed his vampire longings by getting back his soul. There’s the vampire trio of the Master (no not the one from Doctor Who), young boy Colin and sexy Dara who longs to entire Angel back to vampirism. The way she plans on this is fascinating: she pretends to be a friend from Buffy’s school, bites Buffy’s mum Joyce and she practically throws Buffy’s mum into Angel’s arms in the moment Buffy is returning home. This way she hopes that Buffy will end up fighting Angel.

There are some smart character moments in this episode.