SPOILERS: A major character death in the Guardians of the Galaxy v2 movie. He appears in this fanfic series. END_OF_DOCUMENT_TOKEN_TO_BE_REPLACED

VIA Radio Times
Karen Gillan, known as “Amy Pond” and “Amelia” by many Doctor Who fans, shaved her head completely to star as the total bad-ass Nebula (Thanos’ daughter) in the hit Marvel Movie Guardians of the Galaxy.

Unfortunately her shaved hair was turned into a wig which isn’t in the new Star Wars.

Watch the video she shared and see her hair get shaved off.. 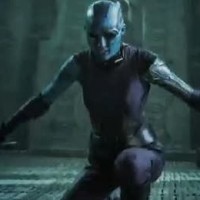 This movie is from the same studio which gave us The Avengers, as well as Iron Man, Captain America, The Hulk and Thor.

This is Space Opera at is finest, where Peter Quill, having stolen a gem from the villain Ronan the Conqueror, ends up having to form a team that sounds like the space equivalent of Avengers. The team includes a raccoon (Rocket), a tree humanoid (Groot), the exotic but deadly Gamora and the somewhat mad (and stupid) Drax the Destroyer. When he finds out what the gem really is, the galaxy’s fate will be threatened. The movie is out on August 1, 2014.