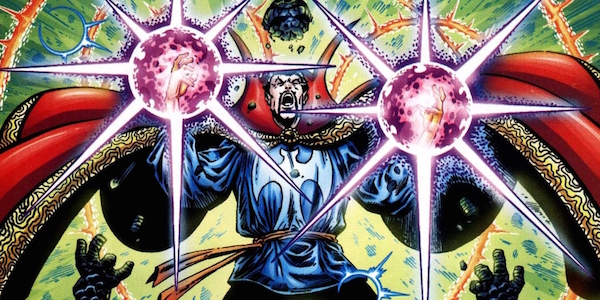 For the Stargate Timeline, it happens after Stargate Atlantis 4×3 and the Stargate Continuum movie.
For the 12th Doctor it occurs after the end of Series 8. Gallifrey lives BUT where is it?

What you need to know:
“The IOA (International Oversight Advisory) has set up a top secret base on the moon powered by a ZPM (Zero-Point Module) – an ancient power source. Stargate Command has commissioned special crafts called Eagles and a Stargate – a ring-like device created by the Ancients able to send people through a wormhole – but one without a protective iris. A separate section on the moon houses a super-hadron collider. A mysterious hyperdrive in the catacombs of the moon has been activated, catapulting the moon to an unknown area in space. The moon ended up sliding through different parallel universes.
Meanwhile back on Earth-777, another moon has just materialised in the place of the missing moon. Aboard the moonbase, one could find the reptilian aliens known as Visitors. They had attempted to bombard earth’s Stargate but failed thanks to the iris.

The Doctor is an alien explorer through time and space, going to amazing and terrible places in the universe, armed with his fantastic sonic screwdriver. The Tenth Doctor is currently travelling with Spock Prime. The Twelfth Doctor is searching for Gallifrey.“

Daniel Jackson was in an Eagle, in contact with Alpha’s encampment on earth-702, busy hiding from the Mindless Ones which were still attacking the encampment.

Suddenly he was cut off, and the moon shimmered out of existence and another moon – the Post-SpaceWar Earth’s Moon Slid replacing it.

He wondered, where did their Alpha (and moon) go to, to which Universe?

They were lost now.  Daniel Jackson, Teal’c and  John Koenig, with their Eagle, on this primitive non-advanced parallel universe encampment. What was it that made these decide to throw away their advanced knowledge, anyway? They had no way of getting back to their moon, or to Earth-777 in any case. Also, who was on this moon? So, even more lost, than lost, and the Mindless Ones were still attacking.

If only the Doctor were here. He could save them. But who knows where he was now, and in his various incarnations. All different yet all the same person. Daniel remembered his time in the TARDIS as a Slider and told the others about that experience.

Now, what was that noise? Was that Whooshing?

“Finally we are out of  that loop thingy!”, Clara exclaimed.
“Loop thingy? Loop thingy? That was an interdimensional loop we were trapped in, like a storm. The TARDIS was trapped and we kept going through different universes, starting from the Void between universes. Nasty place, that. But that’s all behind us now. We’ve got control, but we have materialised in a different universe altogether. This is Universe-769, how fun, I’ve never been here. At least my logs don’t say I have been.” the 12th Doctor answered.
“Well everything went wrong earlier, I hope we can get home” Clara said.
“Wrong? Went wrong? Nothing went wrong, absolutely nothing”, he said crossing his eyes. “We just encountered a dimensional storm, it’s not like we had anything wrong with the TARDIS systems.”
He changed his tone. “Why don’t we materialise somewhere on this universe’s Earth and see what we find there. Could be fun!”
“And what about our search?” Clara asked.
“Yes, for Gallifrey, we will resume that afterwards. We need a break!”

“Look at these people’s hands! Their fingers are kind of purple, like rods, and their first two fingers form a V-Shape!”
Clara answered, smiling, “That’s nice.. we should call this world V-World !”
Suddenly an old lady passed and touched the Doctor’s hip with her hip….
He got angry and thought she must be crazy. She said “Hello stranger. Are you a foreigner from that country where people don’t touch hips to say hello?”
“Touch hips to say hello? Oh yes of course..” he answered her, calming himself down while thinking “why do these things have to happen to me? I don’t even like hugging, let alone this intimate hip touching!”

The noise was not the TARDIS, that much he decided. Daniel Jackson thought it was quite different. Now something visual appeared – a glimmering light – and suddenly a man appeared.

“Is this the Doctor?” Teal’c asked.
“No, it is not”, Daniel replied.
“Indeed. The man is wearing a cloak”, Teal’c said.
“The Doctor I know does not wear one. He has changed his appearance from time to t 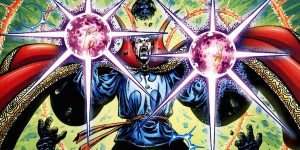 “I am not the Doctor you speak of. I am a Doctor, however. Doctor Strange is what I call myself.”
“Can you help us?” Koenig asked. ” We are in need of assistance. Are you an alien?”
“It depends on what you mean by alien. I’m from Earth, as you are, but not your Earth. I am from Earth-616”, Doctor Strange replied.
“We are under attack from the Mindless Ones.” Koenig exclaimed.
“I can help you with that”, Doctor Strange said while working out a spell to blow apart the Mindless Ones. “They must have escaped from the Dark Dimension. Meanwhile, tell me, how did you get to this universe?”
“We slid on our moon. We accidentally activated a Sliding device. We have a Moonbase Alpha” Koenig replied.
“You would like me to help get to the moon in orbit? I can help with that.”
“No! That’s not our moon. Somehow our moon has slid away. We are stranded here”
“Then what moon is that?” Doctor Strange asked.
“That’s the Post-Space War Earth moon!” Koenig exclaimed. “They are rather belligerent types, they are in a war with aliens. We encountered their earth a while back.”
“You mentioned ‘the Doctor’. I must leave now as I have to urgently go back to my universe. Allow me to send you to him.” Doctor Strange waved his hands and Daniel, Teal’c and Koenig disappeared, together with their Eagle.

“Where are we now?” Commandant Koenig asked.
“I am sure this is not our Earth. There is only one source of civilisation, and it’s a small encampment. There has just been a big explosion there.” Science Officer Victor Bergman replied.
As soon as he stopped speaking a flash appeared on the surface of the encampment. Sandra checked her instruments which indicated a surge of arton particles, indicative of time or sliding travel.

“Yes, my friend Spock, we are in another Universe. The moon has shifted to another universe. That wasn’t Earth-777’s original moon either. The TARDIS confirms that now.”

“So, which universe is this?”

“The Void! The Void between universes!”

“Dangerous!”, the Doctor added. “It’s the bleed between universes! There’s Daleks here, even Cybermen”
“Moon shifting hmmm let me think”, Spock said. “The planet Meridian in my universe is known to travel into a parallel universe, thanks to a solar quantum level cascade”.
“Oh yes, like Brigadoon!” the Doctor commented.
“Brigadoon?”
“Yes a fun story starring Gene Kelly. Haven’t you seen it in the old holovids?” (Spock gave the Doctor a funny look)

Suddenly a big whoosh of energy could be heard, mostly by the Doctor. Daniel Jackson, Teal’c and  John Koenig simply appeared – blinked into reality – within the console room. And their Eagle materialised outside, in a stable orbit around the TARDIS, protected by the latter’s force field.
“Hello old friends! Well Daniel and Teal’c. Koenig – I met your alternate once but not you.” the Doctor exclaimed, and introduced Spock to the group.

A while back two Kromagg-Goauld’s had escaped from the refugee camp all the hybrid Kromagg-Goa’uld were being kept in. Some years passed and they had never been found. They stole an experimental shuttlecraft from Stargate command and attempted to go to the moon.

V-World’s moon was now orbiting Earth-777. The two had detected advanced technology there, so they decided to get their hands on it.

For convenience this is a “map” of the “known” universes the moons are travelling through. Each time a moon slides, the other moons slide too.