This is the crossover fanfic in my fan-series featuring Doctor Who (the Tenth Doctor – played by David Tennant in the new BBC tv series) – and the Sliders.

For the Dr Who Timeline Related to this Fanfic, or to read what happened just before this fanfic, please see WhoSliders 17, yet hundreds of years have passed for the Doctor. The Doctor has regenerated several times and this fanfic occurs after the new series 2 episode “FEAR HER”.
For Stargate Atlantis this fanfic occurs just after the Season 2 episode “EPIPHANY” (2×12).

The Sliders, after having managed to travel back to Earth-001, have kept experimenting with dimensional travel. Years have passed since the Sliders returned. After a trans-temporal tsunami (perhaps caused by the Time War?), the boundaries between dimensions — what quantum physicists like to call branes — have become impossible to traverse…

The Doctor with his companion – currently Rose Tyler from Earth-777, – is on a crusade to champion the cause of the innocent, the helpless and the powerless throughout the whole multiverse of multiple universes. Remmy is still on Earth-820 where he had decided to stay behind. ”

“I told you already, inspector. He just hit me without warning and for no reason at all. I just defended myself at his assault” the Doctor explained what had just happened to him. “The man must have been drinking”
“Or just simply mad”, Rose Tyler said. Rose was the Doctor’s current companion. Her life had been pretty ordinary until the time she met the Doctor. No longer. After travelling for quite some time with the Doctor during two of his regenerations, she had recently lost her boyfriend Mickey to a parallel earth overrun by Cybus Corporation’s Cybermen. It was no easy ride, no escape from reality.
“You assaulted a policeman!” the inspector shouted. His patience had ended. “You’ll be sent to jail for your behaviour”
“He knocked me unconscious! A man has a right to self-defence if he is assaulted!” the Doctor replied. “I’m fed up with your attitude. I’m warning you, you are overstepping your boundaries!”
“You warn me?” the inspector felt shocked at how this man had addressed him.
“I’m leaving now.” The Doctor turned towards Rose and they got up. They had left the room when the inspector, dumb-founded, had started to realise what had happened.
“This is what has happened, Rose. The human race is starting to lose it’s humanity.”
“We’re being Cyberised, Doctor!”
“That’s just it. Quick, let’s leave the building now before all hell breaks lose…” the Doctor opened the main door of the police station, and held it for Rose. “My gentleman!”

“We must be doing something wrong!” Professor Arturo exclaimed.
“We can’t get the Einstein-Rosenberg bridge to stabilise like we used to do before. Something has changed in the void between universes. Sort of a Chaos Wave has occurred. A cross-dimensional tsunami if you like” Quinn remembered how, since a few years ago when they had returned to their home earth, they had not managed to either open a sliding wormhole or even to contact the Doctor via Wade’s mobile phone. They kept thinking of Remmy, on Earth-820. They had no means of contacting or getting to him again. Quinn and the Professor kept sending probes into the bridge but they would all be destroyed.
The membranes between universes, ‘shower curtains’ as Arturo called them, had been moved. Or changed.
There were some possibilities, they surmised. The recent discovery of a Magnetic Vortex in space, in the Orion Molecular Cloud, a couple of years back, meant that it might be possible to induce a stable wormhole from that point. But they would have to go to the cloud, and they had no way of doing that. Also, the way to choose which universe to go to, would not work with this mechanism. This would be random dimensional travel. They would just wander blindly, as they did before they met the Doctor.

On a Battlecruiser in Universe-777 in Pegasus Galaxy 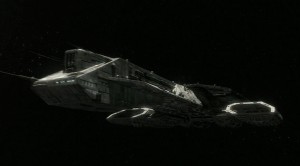 Rose looked at the TARDIS viewscreen. It showed a very militaristic ship outside. Rose noted that the technology was familiar but at the same time different, quite alien. ‘Asgard tech’ – the Doctor precised. ‘We are on a battlecruiser.’ ‘An Asgard Battlecruiser?’ Rose asked.
‘No. It’s an Earth Battlecruiser, the Daedalus.’
‘But it’s 2007. We don’t have Battlecruisers!’
‘Sure you have. You just don’t know about them, that’s all.’
‘Want to have a closer look, Rose?’
‘You bet I do!’

Colonel Steven Caldwell, commander of the Daedalus, had just beamed down to the Atlantis city ship, to attend a a meeting with Dr Elizabeth Weir, commander of the Atlantis Expedition. He was very displeased with the way Lieutenant Colonel John Sheppard’s team had handled its discovery of a ZPM in a cave. The cave’s entrance had been protected by a force field erected by the Ancients many years ago. A time dilation device kept time flowing at a slower rate inside compared to the outside. The purpose of this Sanctuary was to provide a shelter for those who were looking to reach the state of Ascension. Teer, an Ancient about to reach Ascension, allowed Sheppard and his team to leave Sanctuary without having to disable the ZPM.

‘This is the problem I see. Disabling the ZPM would have still allowed the Ancients to Ascend!’ Colonel Caldwell shouted.
‘But we would have violated them. We did the right thing.’ Dr Weir replied. ‘There is no need to shout, Colonel’

The Doctor and Rose were walking through some maintenance corridors. “Exploration”, that was what the Doctor told Rose. It was a fascinating thing for Rose to see this advanced technology, in her own time, not in the future. Just amazing.

Suddenly they came across a vampire-like being which had stowed away aboard the Daedalus. It had lain hidden in a compartment until it had sensed the presence of Rose and the Doctor. It may have been the artron particles which both of them carried as time travellers.

The being was hungry and longed to eat human flesh. It smelt food yet this food was somewhat different. The food was — could that be — Ancient? But different in the same time.
It left its hiding place and moved towards its targets. It began to prepare itself. It would strike and kill them quickly, absorbing their life energies and replenishing its own. It would not be long now.
The Doctor and Rose turned a corner and now came face to face with the Wraith, as it called itself. The Doctor told Rose to stay back – “this thing is dangerous”. The Wraith had been about to communicate with the other Wraiths, revealing the location of the Daedalus to the Wraith Hive Ships, but it had been “distracted” by the arrival of the strangers.
The pale white Wraith grabbed the Doctor. Its teeth began to snarl viciously. It began to drain life energy from the Doctor. Sugars, pigments and collagen began releasing from the Doctor’s skin and body. The Doctor screamed in pain.

After a few seconds, some defense system kicked in and a good amount of artron energy surged towards the Wraith, short circuiting it! This left the Wraith paralysed, and it fainted completely. The Doctor was about to fall down but Rose held him. The Doctor began to recover and explained to Rose about the Wraith race.

The Asgard Hermiod teleported to the corridor where Rose and the Doctor were, and introduced himself. Rose looked at Hermiod’s large head and dark eyes. “I am the ship’s Asgard technician”, Hermiod explained. “I have never seen this happen to a Wraith”. Rose replied “it got heartburn, I think!”.
“It’s a good idea if you meet Colonel Caldwell”, Hermiod said. “No need”, the Doctor answered. “We’ve got to be on our way. Perhaps we’ll meet him another time.”

THE END OF VOLUME ONE OF WHOSLIDERS

Continued in the next Fanfic Who Sliders 19 “ROSE’S SLIDERS” !

Doctor Who, Rose Tyler are the BBC’s
The Sliders are Fox/Universal/Sci-Fi Channel’s
The Tok’ra, the Ancients, the Wraiths, the Goa’uld, Commander Caldwell, Stargate Atlantis and Stargate SG-1 (including Sam) are the property of Stargate (II) Productions, Showtime/Viacom, MGM/UA.
The Trans-temporal tsunami is an homage to the cross-time tsunami wave in Marvel’s uncanny X-Men 462. It’s similar in effect to the current situation in the Doctor Who series on tv.
The Magnetic Vortex is inspired from this “news” story.