The truth, however, was there was more than one Mara, and more than one kind. After the Federation had been formed, the earliest Mara (or Maras, it is not known) and its own Sumaran Empire had been defeated on Manussa, the Sumaran Empire homeworld, by the Federation’s flagship – the Enterprise – commanded by a young Jonathan B. Archer (the B. stood for Beckett as in Sam Beckett). The Mara was only banished to what the Doctor called the dark places of the inside. But was there one Mara, more than one, or a large number which were inter-connected like the Borg species were?

After the Doctor banished the Mara on Deva Loka, a parasitic form of the Mara was still in some control of Tegan, at un unconscious level, giving her the strange dreams. The Doctor later on called this a latent force. Once she woke up, she could not remember the dream. Only the sensations of fear and weak knees remained. Her knees felt like water, unable to lift her up, unable to sustain her weight. She did not associate this with the Mara on a conscious level, so far. But after breakfast with the Doctor, Adric and Nyssa, she recalled the Mara, not with considerable disgust, and asked the Doctor about it. She felt safe enough to discuss the matter now. Little was she aware of what was in her.

The area outside was an empty spatial area, void of any features except four humans in one corner, a grim tall figure, who resembled a red indian chief
(Back in the SOL)
Tom: Sandman?
Mike: Santa Claus?
(PU)
in a mockery of human form,
(Back in the SOL)
Crow: Must be a Picasso sketch.
Mike: That’s because when the Adversary appeared in the X-Men comics for the first time, he was drawn by the great Mike Silvestri! The style was weird I think.
(PU)
another normal-length humanoid, resembling an amazonian native, with
(Back in the SOL)
Crow: It’s Really Dull Old Guy!
Mike: Who?
Tom: Other guy movie.
Mike: Oh.
a snake-design motif on his arm,
(Back in the SOL)
Tom: So much for the idea of an infinite universe being populated by an
infinitely varied population.
(PU)
two dead costumed superheroes and a tall black haired woman encased in what appeared to be a huge ice-cube.
The Doctor commented on the two costumed men, who were wearing what looked like the British flag. He also noted how this woman, who was wearing entirely white clothes, resembled Tolkien’s mythical Galadriel.
(Back in the SOL)
Mike: [deep announcer voice] Can you rescue Princess Zelda from the evil
Xantar? Coming soon: Final Phantasy Ultima Force XII!
(PU)
The occupants of the TARDIS could also listen to what was going outside.
(Back in the SOL)
Mike: Which was rather odd, considering that the speakers had been
missing since that little stopover in Woodstock.

(PU)
The four were the Sliders. After they left the SOL, they arrived in this pocket dimension. It was empty, except for the imprisoned Mara and Adversary. 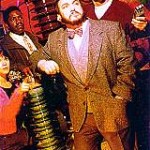 [ Author’s note: The X-Men referred to are the comic book versions, not the movie X-Men. The Movie X-Men meet the Adversary in the fanfic ‘sequel’ to this story, called Doctor Who and The X-Men II The Sequel. The Dire Wraiths can be now seen again in the new Spaceknights Limited Series.]

In reality it was a warped creature from a faraway planet, having been condemned for its crimes and set in frozen cryogenic imprisonment on an asteroid in deep space, left for eternity. But some faraway explorers had in fact encountered it, and freed it. Unfortunately they barely got away alive.
The X-Men had defeated the Adversary ( details are given in the Sequel ), and imprisoned him in this pocket universe. Unfortunately the Sliders vortex opened in this universe, which was not more than a room large. So there was not much they could do.
Suddenly the TARDIS had materialised in this pocket universe.

Quinn began to analyse the surrounding and said “Strangely enough, this universe itself seems to be made up of…”
(Back in the SOL)
Tom: …Swiss Cheese!
(Back in the pocket universe)
Quinn: … the Einstein-Rosenberg-Podolsky bridge itself! It’s as if we are stuck between slides!
The occupants of the TARDIS could listen to what was being said, while observing on the viewscreen.
“Sliders and Roma, you are going to meet your end! The Captain Britains who were protecting you are now dead. I, The Adversary have returned,
(Back in the SOL)
Crow: Front, meet end. End, this is your front.
(Back in the pocket universe)
and enslaved you, Roma. Together with the Mara, We will be rulers of all
(Back in the SOL)
Tom: With you so far.
Crow: Understood.
(Back in the pocket universe)
the parallel universes, thanks to your Sliding technology!” said the Adversary.
(Back in the SOL)
Tom: Whoa! Back up!
Crow: Ooookaaay.
Mike: Oh no!
(Back in the pocket universe)
“Thanks to you, Sliders, I will now be able to enter other dimensions and realities at ease! And once I the Adversary free the Mara, together we will be supreme!” said the humanoid who had the form of a native.
(Back in the SOL)
Tom: Yes! The burrito supreme is mine forever!
Crow: Great singers, those Supremes!
(PU)
(PU)
Suddenly a young man appeared in the room straight out of nowhere.
(Back in the SOL)
Crow: Who’s that guy?
Tom: He’s one of the Mads, isn’t he?
Mike: No, he wasn’t a scientist, but a mad army officer, back on Deva Loka in the “Kinda” episode?
(PU)
He took a breath. Everything was still moving in circles around him, where was he. Was he still alive, or not? Was this purgatory or some limbo?
Where he was before, they were trying to break out of something which would never stop. Rules of time, they said. The equipment overloaded, and a surge ensued. Everything had gone black. Now he opened his eyes, but everything seemed white instead. This was empty. He felt some pain in his throat. This was some rough transmat ride he took, though he did not recall using any transmat. The explosion should have killed him, but the temporal energies trasmatted him to this lost place, wherever it was.

“Oops! Isn’t that Aris?” the man said.  The man was wearing a standard army uniform from a future era. Quinn recognised the man as being Hindle, from the episode “Kinda”. “Curiouser and curiouser, said Alice”, Remmy said.
“I was on the planet Deva Loka, soon after the Doctor left. It seems that what the old woman had said was correct, after all. Deva Loka was stuck in a timeloop – no it was put in a Ground Hog day style loop by that evil thing the Mara.” Hindle explained.
“Hm… The Mara’s here. Like the song ‘Kinnda’s gonna freak you out!’ We don’t have much time, we’ve got to get away.” He commented.

“That’s the Doctor’s TARDIS, on the opposite side of this empty space! Let’s go there, quickly!” and the Sliders ran with Hindle towards the TARDIS.

They knocked on the TARDIS and waited for the TARDIS doors to be opened by the Doctor.
(Back in the SOL)
Crow: Hey! These things weren’t in the story when we first saw it.
Mike: It’s clear some things have changed.
Tom: Time is elastic, he said.
Crow: Timey-Wimey!
Mike: What?
Crow: I don’t know what came over me. A twinge of cosmic angst. From the future.

Continued in part 3
Story (C) 1992-2016 Mr Scirev
All Marks are owned by their owners. Doctor Who, Hindle, The Mara is the BBC’s
The Sliders are Fox/Universal/St. Clare Entertainment/Sci-Fi Channel’s
Colonel Rickman is Universal Studio/St. Clare Entertainment’s
Red Dwarf characters are Rob Grant/Doug Naylor/Grant Naylor Productions’
MST3K to Best Brains, the X-Men and Excalibur belong to Marvel Entertainment Group.
Il-Kaptan ( Kaptan Brittanniku ) is owned by myself because I made him up.

Galadorian Spaceknights – ROM had faced the Dire Wraiths before, also.