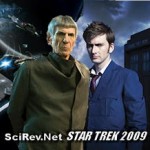 A humming sound could be heard in the Engine Room of the Enterprise. Suddenly out of nothing, a blue box appeared. Montgomery Scott, Chief Engineer, was dumbstruck… he had seen old photos of telephone boxes but never believed he would see one. And now, it opened…

Out of it came a man, smiling. He was wearing regular clothes, unlike Scott who was wearing a Starfleet uniform. He looked around. A memory came to him.
“Yes. I know this place. The Enterprise-A. But wait, it’s very shiny..”
“Ahem sir. I must ask what are you doing aboard this ship. What is your… box?” Scotty, as Scott was known, asked, while some security staff checked for any weapons, which they did not found.
“That’s my ship. Something’s wrong here. Why is this place so shiny and what’s with all the white decor. Knew a moonbase some time ago, had this same kind of decor. But I didn’t go to F-Space, or Universe-881. No this is still Universe-777. I’m sorry, I didn’t introduce myself. I’m the Doctor. I would like to speak to your captain. Is it Kirk by any chance?” he answered.
“Yes, of course. It’s James T. Kirk who is the captain.”
The Doctor thought Scotty reminded him of the Editor, a rather annoying villain he had met a long time ago in his previous incarnation.

Soon after the Doctor was escorted to a briefing room where the captain was waiting for him together with a very special guest. The corridors, the Doctor noted, were again mostly white and quite different from the ones he had seen in previous times when he had crossed over to Universe-881.. This Enterprise had some better tech, he noted. He started to recognise technology related to the Stargate project, and even Asgard mechanisms…

When the Doctor arrived, the door opened automatically. He entered, and saw a figure he recognised. “Spock! If it isn’t good old Ambassador Spock!” the Doctor said, patting him. The Doctor looked at Kirk, who was slightly different, somehow, from the Kirk he had met before…
“Spock, What brings you to this universe?”
“Doctor! It is you! You look.. different.”
“I have regenerated a few times since we last met.”
Spock Prime then continued. “I have ended up in this universe in the past after attempting to stop a supernova from destroying my universe – it managed to blow up the planet Romulus. Unfortunately a Romulan called Nero – an evil man – attempted to follow me, and we ended up in the past. He killed George Kirk, which resulted in a different parallel universe, this one. Kirk here became captain quite early compared to F-Space, as you called my universe when we first met.”
“Oh I see! Did you manage to stop this Nero?”
“Yes, but 25 years after his arrival, he managed to blow up Vulcan-777 using a black hole. Many, many have died, Doctor.” Spock answered, a tear almost forming in his eye.
“Which brings me to this mission. We are taking the survivors to the new Vulcan homeworld. Delta Vega was its old name,” Kirk said
“Delta Vega? Wasn’t that a planet near the Galactic Barrier?” the Doctor asked.
“Not in this universe, Doctor. In this universe it was an icy world, but we have terraformed it so it is more habitable. Doctor I would like to ask a favour” Spock said
“Go ahead”, the Doctor said.
“Take me back to Vulcan-881, in my universe.”
“No. I’m sorry. I’m so sorry. I can’t do that.”
“What is the reason?” Kirk asked. “Can’t you do this?”
“No. I no longer can travel to other universes. Since the Time War occurred, it has been almost impossible to do so. And any attempts might destroy Earth.”
“Earth?” Kirk was not really convinced.
“Well, yes” the Doctor said. “I’m afraid you will have to spend your life in this universe. You could travel with me for some time if you like.”
“That would be a good idea. There have been experiments to try to break the boundaries between universes, perhaps in the future they will have be successful.”
“We have much in common, Spock. My homeworld Gallifrey was destroyed in the Time War.. I know how it feels.”
So Spock Prime, as he was affectionately called by Kirk, left with the Doctor, in his TARDIS, soon after he oversaw the survivors beam down to the surface.
THE END…

Doctor Who, Gallifrey are the BBC’s
Enterprise, Spock, Kirk, Delta Vega, Vulcan are Paramount’s
Stargate and Asgard are the property of Stargate (II) Productions, Showtime/Viacom, MGM/UA

STORY NOTES: I will quote the movie writer Orci, about the prime universe, “It continues. According to the most successful, most tested scientific theory ever, quantum mechanics, it continues.”
So Picard and Ryker are still doing their thing. See this article for details.
Also this blog post details the narrative devices involved, contiguous universes and the ability to travel between them.
Real Life comics also takes my approach to this subject… “Spock Prime is not in his past, but is actually in another universe … Prime Star Trek universe continues to exist – it’s just now short one Ambassador Spock”.