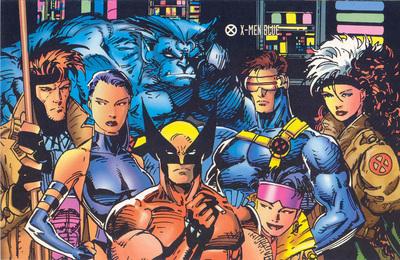 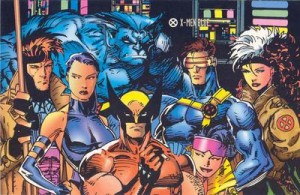 Mike: How can he tell them if he’s inside?

Crow: Does it really matter?

The TARDIS doors were open, so they could hear me.

I had told the Sliders, Hindle and my companions Nyssa, Tegan and Adric to stay at the mansion
while I showed the X-Men my TARDIS.

Tom: No real change from their normal characters, then.

Jean Grey and Cerise entered next. “It does seem larger inside, actually.” commented the telepath. “I’ve never seen anything similar within the Shi’ar Empire.” Cerise remarked. The Doctor explained, “you see if you have two items of varying size, then you take the larger item, and get it closer to you, it would seem smaller than the other one, wouldn’t it?”

Cerise commented that this was obvious. The Doctor then said, “now if you could keep them apart but put them one in the other, the larger item would simply fit within the smaller one!”. Cerise looked confused at the Doctor. “That simply does not compute, or however humans say that.” The Doctor remarked, ‘this “non-computation” has been the most important advancement of Time Lord science’.

Beast was extremely interested in hearing about this theory, while Rogue, Psylocke and Bishop stepped inside and looked around themselves.

“The room is definitely larger than the exterior. And beyond that open door,
I can see other rooms, a long corridor with doors and corridors from some of those open doors. Large corridors. This is not possible.” said Bishop.

Crow: You’re right. You’re all standing in an impossibility. That’s it,
everyone’s dead.
Mike: How can Bishop see through the walls?

Author: Bishop was looking through the open door.

“It is possible.” I corrected him.

“You’ve got a lot to unlearn. They all find it hard to understand,”

I mumbled under my breath. Well.

Mike: They mumble in this ‘fic an awful lot, don’t they?
Crow: Must be former postal workers.

“Hm, what did you say?” enquired a confused Bishop.

“Nothing. Nothing important.” I replied, thinking and hoping this experience wouldn’t unhinge Bishop’s mind.

Crow: [Doctor, breezily] Just planning how to kill you, that’s all.

“Let me show you around the TARDIS” I said then.

“The place is huge, I will just show a few of the main rooms and corridors.”

“All right. This ship of yours is extremely interesting.” replied the
Professor.

Mike: [Professor] I could’ve have done it with coconuts, you know. What do

you think of that?

I took the X-Men to a number of different rooms, until I reached a
circular room which had a reflective surface.

Tom: He doesn’t even know his own TARDIS, how’s he supposed to be able to fly the thing?

Crow: He can’t, at least, he isn’t supposed to be able to. Scirev’s forgotten,
that’s all.

“While I may not be able to control my TARDIS navigation with 100% precision,
that does not mean I have NO control. It’s more of an 80% precision.

To avoid an evil enemy known as the Black Guardian, some time ago I had to use a Randomiser device linked to the TARDIS’s navigation circuits. I had to remove it some time ago on the planet Argolis. With the randomiser I would have no control on where the TARDIS would go, and avoid the Guardian.” I further explained.

Suddenly to everyone’s astonishment, there was a strange reaction.

Mike: Must be a cut scene from “Chain Reaction.”

“No… Get that mirror away….” Gambit shouted!

Crow: Scirev’s really getting into this story, accentuating statements and what not.

Crow: Watch out for the flames shooting from his ears!

Mike: So much for Xavier’s morals.

in an attempt to see what had happened to him and to calm him down.

Mike: That’s ok then. Almost had me worried.

To his astonishment his mind was different, almost alien, indecipherable.

Tom: He must be scanning Pauly Shore’s mind.

Crow: Britney Spears boobs – she actually wants to get breast implants, I heard.

Mike: Oops, I Did It Again.

“What have you been hiding more from us? First we find out you were involved in the deaths of the morlocks, what now?” screamed a viciously angry Bishop.
Bishop pointed his large weapon at Gambit.

“The parasitic form of the Mara is controlling him!” I claimed pointing to Gambit.
“No, Bishop, do not shoot him. You will kill both of them!”
This parasitic form was known as the Gou’ald by some humans of a team called Stargate SG-1.

Tom: And why, pray tell, is this a bad thing?

I then said “Look at his arm, it has the sign of the Mara, the snake!”.

Crow: Watch out! All of Hell’s Angels are Mara, too!

“You can see that it is not a tattoo, watch what is happening to it!” I said.

The snake was released from his arm, because of the circular reflection, and it started hissing.

Mike: If only rashes came off that easily.

“That is the form of the Mara in this world” I explained calmly.

Tom: [Doctor] We’re going to die now, so we may as well be calm about the whole thing now.

It lashed its fangs out at me “….you have not defeated me Doctor…we shall meet again later…”

it said while it kept growing in size, similar to what had happened on Deva Loka.

Crow: And twice as cheesy!

Mike: These rice twistees are great!

When it grew to a very large size, it disappeared in a flash of red
light. “It has left this mode of existence again.” I stated.
Gambit was lying on the floor. He was muttering nonsense. In a few
moments he came to and looked at me.
“Who..Who are YOU?” he said. “I don’t remember you. Where am I? How did I get here?” he asked.

“I am the Doctor. You are in my TARDIS. I met you X-Men today, do you remember that?”

Mike: The Doctor‘s gotten awfully impersonal in this story, hasn’t he?

“No. I remember the alarms ringing, and leaving the Mansion. The rest is a blank.” Gambit replied.

“It’s a long story, and frankly time is something we are short of.”